5 UK Landmarks – if Artists and Architects Designed Them

Anyone who has visited the UK will testify to the number of glorious landmarks that it has to offer. From awe-inspiring monuments to buildings of wonder, the UK is a real haven of architectural and design feats. But, what if these UK landmarks were a bit…different?

What if Picasso designed London’s Tower Bridge? What if Frank Lloyd Wright, one of the American great architects, turned his eye to one of the UK’s most stunning cathedrals? A series of new images commissioned by TransPennine Express reveal all.

Tower Bridge is one of the most famous and oldest bridges in the world, built 125 years ago. It is an iconic part of London’s landscape. Tourists flock to the bridge to take in the breath-taking panoramic views from the high-level walkways that look down at London through the thrilling glass floor. In the re-imagining, Pablo Picasso’s distinctive abstract style has been applied. The center of the bridge where people can walk over the glass floor has been transformed into a touching tribute to the Union Jack flag, whilst the suspension has been given a bright, color-blocking makeover.

Liverpool’s Albert Dock is an important part of the city’s heritage, as a previous hub of global trading and now, as the home of culture. Take a stroll along the World Heritage Waterfront and you will find museums, galleries, shops, and eateries. In 2018, this UK landmark was given Royal status in recognition of how the area changed the cities fortunes.

One cultural highlight of the Albert Dock is the Tate Liverpool museum – which also happens to be home to some of the Godfather of pop-art’s work – Andy Warhol. Warhol’s work centered around mass culture and its impact on life, making him an obvious choice for the re-imagining. The image takes inspiration from his classic ‘Campbell’s Soup Cans’ using his instantly recognizable color palette.

York Minster hit the press recently, when singer Ellie Goulding got married there, and international celebrities such as Katy Perry descended on the nuptials. The landmark is known for it’s enchanting Gothic architecture, straight out of a storybook. The Minster as it can be seen now was completed in 1472, but the site was originally used for a wooden church in 627.

It made sense to pair the Minster with the great American architect Frank Lloyd Wright in the re-imagining – Lloyd Wright was known for his use of ‘organic architecture’, using natural elements to make his buildings appear seamless in their surrounding environments. The image lends from some of Lloyd Wright’s most famous buildings in the USA, such as Fallingwater and the Jacobs House.

Glasgow is well known as a city full of humor. So cheeky are the residents, that they regularly add to one of the city’s most well-known landmarks – the Duke of Wellington statue. Take a stroll past the statue on any given day, and you’ll spot a traffic cone on the Duke’s head whilst he sits proudly on his horse. Visit on a Sunday after a wild Saturday night, and you might spot several cones. The statue was erected in 1844, with the cone tradition beginning in the 1980s.

The local council tried to fight the locals for many years, putting up cameras and deterrents, but eventually, the cone was given recognized status as an integral part of the statue. In the re-imagining, the legendary Surrealist artist Salvador Dali has taken over, bringing his flair to the traditional monument – swapping the Duke’s trusty horse for an elephant, and trading the traffic cone for a more extravagant affair, with bright colors.

Durham Cathedral is a much-loved local treasure, looking over the city since 1133. It is one of the most well-preserved Norman buildings in the UK and hasn’t been drastically modified unlike others. If it had been, it could have been designed by the 20th Century American architect, Louis Kahn. Kahn had a distinctive Modernism style which he combined with a tribute to ancient monuments. In the re-imagining, Durham Cathedral has been given a Kahn makeover, with geometric shapes adorning the tower – a nod to Kahn’s most famous buildings, including the National Assembly Building in Bangladesh.

See All the UK Landmarks Re-Imagined

You can see the entire series of reimagined UK Landmarks in the following video.

The full series of images includes Edinburgh Castle, the Angel of the North and the Humber Bridge. You can see more via the TransPennine Express website here: https://www.tpexpress.co.uk/explore-the-north-and-scotland/blog/2019/september/uk-landmarks-reimagined 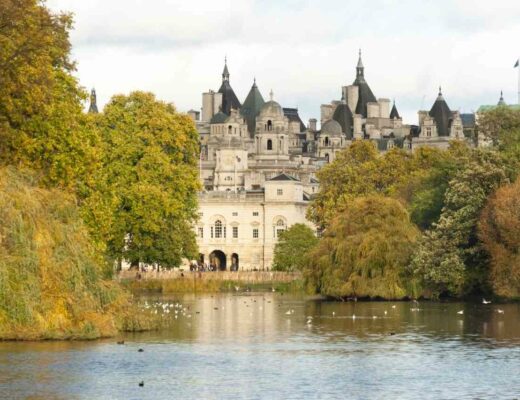 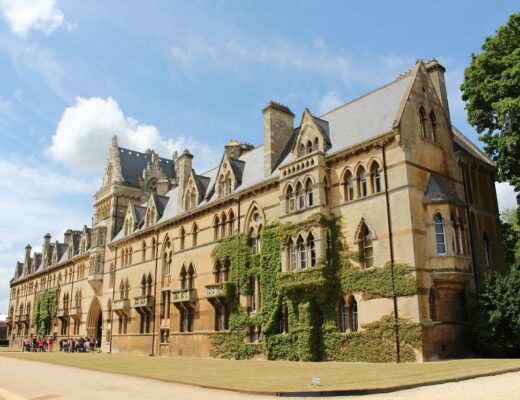