You are here: Home / Travel Destinations / Asia / The Maldives: Postcards From Heaven 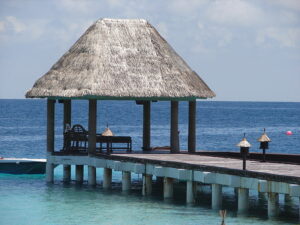 In the Maldives capital of Malé, gelato coloured buildings snake through shady alleyways. The area may seem impenetrable to outsiders due to its tiny 1 mile radius and prodigious population of 100,000 people in this tiny space. However, not far from anywhere in Malé is the ubiquitous beach and sea – a legendary treasure that stretches over 1,200 surrounding atolls, with around 280 islands having resorts or head count there.

The Maldives is a playground of gems that’s designed to be explored by yacht or chartered boat. Since so far no proper commercial transport system has been constructed between the islands, these bits of tropical land in the deep blue are populated by friendly locals and have not been jaded by mass tourism. Expect the welcome mat to be laid out and for the beds to be turned down, in any case.

For travel in between islands, it’s a laissez-faire affair with the captain deciding on a moment’s notice where the next destination will be. Because of this you’ll have to be prepared to ask someone directly and pay the fee, usually around £25 – scams are unheard of in this part of the world, so be adventurous and do as the locals do. You will enjoy a tour through tropical scenery that’s left virtually alone, to grow wild and free on uninhabited islands.

If by now you’re already thinking of taking holidays to the Maldives, we have listed a few dreamy options to get the best out of this postcard from heaven.

Things to Do in The Maldives

What better thing to do than plunge underneath the water for a microcosm of shimmering coral and flirty fish underneath? Otherwise you can skim along the top by dhoni (local boat) or powered by your own arms and legs: here there is only one speed and that’s languorous and dreamy. If you’re looking for lush underwater realms, the island of Villingili is the place to go.

Get Over to Gan in the Maldives

Take an island hop over to Gan, a former British airbase that still has an airport and a ferry slowly meandering over to Gan through Addu Atoll. One way to pass the time of waiting for the tortoise-slow transport is by following the local tradition to chew on areca nut.

A holiday in the Maldives isn’t only for the Sultan of Brunei and his friends. Head north to Hanimaadhoo, a long thin island in Haa Dhaalu Atoll, where there’s an airport that’s used as an interchange between some nearby islands. The airport has a basic guesthouse and a sleepy little canteen with cheap local food: beaches around here are serene and quiet beyond belief.

Temple Of Heaven – The Bridge Between The Present and The Past

Spend the Holidays Island Hopping in the Maldives

A Week in Sardinia

Spring break 🤔 been thinking about taking the k