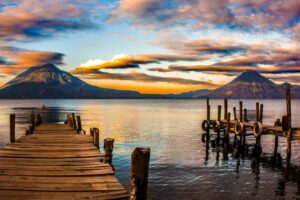 Guatemala, a Central American country bordered by Mexico to the north and Honduras to the south, has a large amount of coastal exposure on its western Pacific shores and a small amount of eastern Caribbean Sea coastline. With about 30 active and extinct volcanoes, numerous caves, jungles, cities and some of the most famous ancient ruins in the world, there are a number of … END_OF_DOCUMENT_TOKEN_TO_BE_REPLACED