If you’re making your first trip to England, there are certain traditional British foods that you simply must try! I know, England isn’t a place one typical thinks of as a foodie destination. You probably think of pasta in Italy, fresh fish in Southeast Asia, and other similar food-intensive destinations. But British food is surprisingly food! Here are my favorite recommendations.

One of the highlights of pub food is found on Sunday afternoons throughout the United Kingdom. I’m referring to Sunday Pub Roast, a hearty and filling meal. The meat may be beef, lamb, or – my favorite – pork belly complete with cracklings, the roasted pork skin, which is full of fatty flavor and deliciously salty.

Your pub roast will likely be served with root vegetables. Potatoes are common, as are carrots, parsnips, and maybe turnips or beets. You may also have a small salad or other vegetable such as broccoli.

The Sunday roast meal is rounded out with Yorkshire pudding, which is a bowl-shaped side dish that is often used to hold gravy for the roast. Yorkshire pudding isn’t sweet; it’s the British equivalent of a side roll or biscuit. No strong flavor but a nice starch to accompany the meal.

If you ARE looking for something sweet, perhaps consider a fine piece of British chocolate!

When the Brits say “full”, they mean it! A full English breakfast, or “full English” for those in the know, is a plate of just about everything you can imagine in a breakfast. There’s toast with honey or black currant jam, eggs, sausage, and bacon. (In the US, bacon comes from the pork belly. In England it comes from the back, so it’s a bit different but just as delicious. It’s similar to Canadian bacon but fattier.)

Then things get a little weird different in British cuisine.

Brits eat Heinz 57 baked beans with breakfast! It’s not exactly barbeque-y but it’s kind of close. It’s not what most Americans think of as breakfast food! There’s also generally tomatoes and mushrooms, both cooked. And then there’s black pudding.

So here’s the thing about the word “pudding” in England. It can be a carb, as in Yorkshire pudding. It can just generally mean “desserts”. Or, in this case, it’s a type of sausage made with grain, pork fat, and pork blood. No, that’s not a typo. Yes, it’s made with blood. And it’s actually not gross at all…in fact, I ate my entire serving. (Unlike the beans!)

Looking for a breakfast that’s a little smaller or maybe something you can eat on the go? Try a bacon bap! This is a breakfast sandwich consisting of back bacon (as described above) on a soft roll. Brits often garnish it with ketchup or brown sauce, a condiment common in the UK.

Bacon baps sometimes come with egg too, making them the UK equivalent of a bacon and egg sandwich…but better.

Nothing hits the spot on a chilly England day like fish and chips! Not to mention the fact that fish and chips are likely the first thing anyone thinks of when you say “British food”. Deep-fried cod or haddock plus chips (what we call French fries) and a side of mushy peas is the ultimate English comfort food.

Try sprinkling your chips with malted vinegar or, if offered, dipping in curry sauce. Both are quite good!

Mushy peas, well, your mileage may vary. I don’t like peas of any sort, so mushy ones were no better or worse than regular peas. Many pubs offer regular ones instead of mushy if you prefer. However, as British food goes, I’m happy to leave the peas and clear the rest of my plate.

An afternoon in England wouldn’t be complete without tea! English are known for savoring their tradition of drinking afternoon tea. The most traditional choice is black tea, though many prefer green, rooibos, or herbal and so a variety is usually available in most tea rooms.

Tea is often served with a light snack to hold you over until the evening meal, and in my opinion, the best choice is cake! (Although light sandwiches are also common.) Again, you’re likely to find a variety of choices when it comes to cake.

And don’t be surprised to find yourself drinking from fine porcelain no matter the establishment. I took tea and cake in a tent in the rain in the most beautiful teacup and saucer!

Cakes are wonderful with tea, but for a true English dessert we must turn to the sticky toffee pudding. This delicious confection is so sweet you could end up in a diabetic coma, but if you do, it will be well worth it.

Sticky toffee pudding actually starts with a cake that’s made from dates. I didn’t know this when I ate it and never noticed any date-like flavor, probably because the cake is then drowned in toffee sauce. Did I mention it’s really sweet? You’ll sometimes find it served with vanilla ice cream which actually cuts the sweetness. If sticky toffee pudding isn’t your cup of tea (see what I did there?!?!) then here’s a huge list of British desserts you should consider instead.

There you have it, my favorite traditional British dishes to try! There are several dishes I haven’t year had, so I haven’t listed here, including: spotted dick, jellied eels, and kidney pie. Indian cuisine, including chicken tikka masala, is also popular in Britain.

If you’re heading to England for the first time, or even if you’re a pro, these are the most classic British foods to try while you’re there. (And with the exception of the black pudding, none of them likely seem very unusual!) 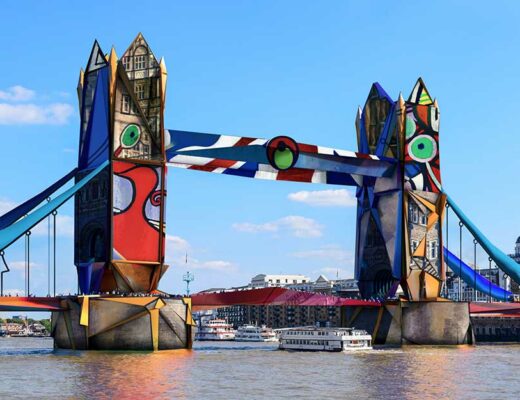 5 UK Landmarks – if Artists and Architects Designed Them 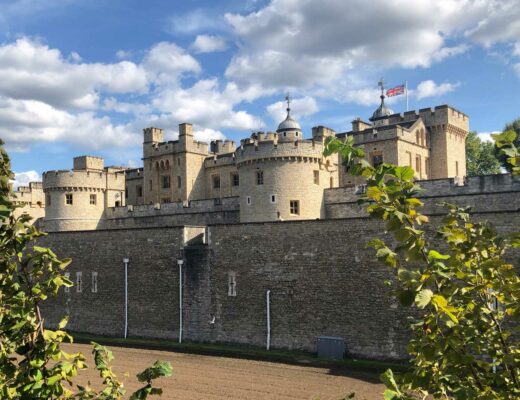 Visiting the Amazing Tower of London