In the heart of East Africa, Kenya is home to sweeping grasslands and savannah, the spectacular Great Rift Valley, and highlands within the surrounding mountains. From the eastern shore of Lake victoria to the Metropolis of Mombasa hugging the Indian Ocean along Port Reitz, Kenya is home to some of the most diverse and engaging landscapes and destinations on the continent.

Kenya is perhaps best known for its wildlife. With dozens of national parks and reserves throughout the country, travelers can go on safari in the Maasai Mara Reserve, Amboseli National Park, and many others, whether to view the migrating wildebeest, sneak a peek at wild lions or elephants, or gaze at the not-so-distant Mount Kilimanjaro across the southern border with Tanzania.

Kenya's cities are a testament to the impact of ancient traditions and cultures alongside the bustle of modern life. Nairobi is one of the largest cities in Africa with more than 5.5 million people and an estimated 9 million in the greater metropolitan area. And yet just a short drive in any of three directions, you'll find people from Africa's proudest traditions living alongside the sweeping cityscapes.

Whether you are eager to explore the savannah and see some of the world's most majestic and often most endangered creatures - carefully preserved and protected by a firm Kenyan conservationist tradition - or you want to witness the array of African cultures and influences from the highest mountains to the beaches of the Indian Ocean, Kenya is one of the most memorable experiences you'll find. 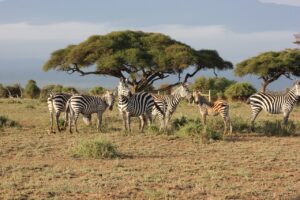 International travel to many parts of Africa is increasing as tourists seek more unconventional travel destinations. To meet the growing demand, countries across the continent have increased their tourism provisions, and many destinations that families may have been hesitant to take children to in the past have become much more viable options. Kenya is one such place, … END_OF_DOCUMENT_TOKEN_TO_BE_REPLACED